Worldwide obesity is a growing issue and this is something we should all be concerned about.

New Zealand, like many other developed and middle-income countries, has a growing obesity rate.

While at its most simple level, weight gain is caused by people consuming more calories than they burn, the reality is much more complex.

Rising obesity rates in the developed world can be attributed to a number of factors, including changing work environments, the over-consumption of high-energy processed foods and beverages, a lack of physical activity, environmental factors, parental health, as well as genetic pre-disposition.

The consistent over consumption of products high in sugar can contribute to excess energy intake, and can result in weight gain over time. That is why we recommend sugar sweetened beverages as an occasional beverage choice. 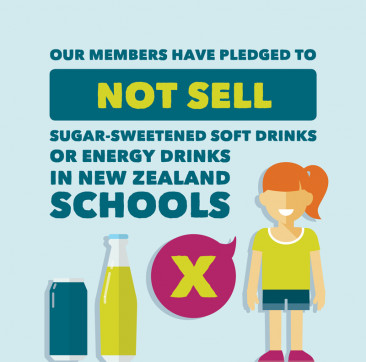 Rising obesity rates, however, cannot be solely attributed to increasing sugar intake. In fact, the intake of sugar and sugar-sweetened beverages has been decreasing in both New Zealand and Australia at the same time as obesity rates have been increasing.

Between 1997 and 2009, the median daily sugar intake for New Zealand males fell from 62 grams to 55 grams, while the male obesity rate climbed from 17 percent to 27.7 percent. A smaller but similar trend was seen in females.

Government data also shows that just five percent of a New Zealand adult’s calories come from non-alcoholic beverages, with the majority of calories coming from bread, biscuits and other foods.

And since 2010, soft drink consumption has fallen by 4.2 percent, while sales of low and no sugar non-alcoholic beverages have grown by two-thirds over the past decade.

Despite these trends we do understand that we are part of the problem and that we need to be part of the solution. That is why the New Zealand Beverage Council strongly advocates a multi-pronged approach that takes into account initiatives that are evidence based and proven to work.

Playing our part in tackling obesity

This includes new and reformulated products, offering low and no-sugar varieties and the voluntary displaying of kilojoule information on front-of-pack labelling.

We strongly support the government’s voluntary Health Star Rating System and will continue to ensure our members have adopted the system’s Integrated Energy Icon on front-of-pack labelling.

Our members are also committed to looking at options for further innovation and the reformulation of products to ensure consumers have access to a wide range of beverage options that suit all tastes and dietary requirements.

Our commitment to kiwi kids

In addition, our members have pledged to only sell bottled water to primary and intermediate schools in New Zealand, and to not sell sugar sweetened carbonated soft drinks or energy drinks into secondary schools. This is a significant commitment by the industry to help address childhood obesity and deliver sugar free schools in New Zealand.

Our members have also committed to not advertise any beverage in media that directly targets children under 14, or where 25% or more of the expected audience will be under-14.

We believe that education and nutritional literacy from an early age are key to changing the obesity trend in New Zealand. With the right education, we believe that sensible, occasional consumption of foods and beverages containing sugar, fat and salt can have a place in a balanced and active lifestyle.