There is increasing evidence showing sugar taxes are ineffective in reducing obesity.

International evidence shows the assumptions made by proponents of a tax on sugar-sweetened beverages (a sugar tax) do not hold true in a real-world environment. That is, consumers do not change their purchasing behaviour from high-calorie products to low-calorie products and obesity rates do not fall.

In fact, no study based on actual experience with sugar taxes has identified an impact on health outcomes.

That is why the New Zealand Beverage Council does not support the introduction of a sugar tax in New Zealand and why we advocate for a more holistic approach to tackling obesity, with a focus on nutritional education and encouraging increased physical activity. 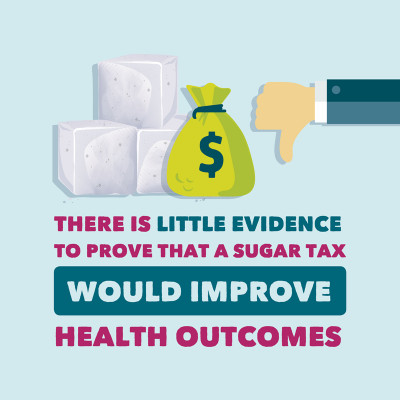 In recent years, sugar taxes have been introduced in Mexico, the city of Berkley in California, and more recently in the United Kingdom and South Africa to combat obesity. As a result, there is a significant body of research and evidence on the effectiveness of these taxes.

In their report Sugar Taxes: A Review of the Evidence, the New Zealand Institute of Economic Research (NZIER) found the evidence that sugar taxes improve health outcomes was weak.

As part of their research, the NZIER analysed 47 peer reviewed studies and working papers relating to sugar taxes and found that:

Likewise, McKinsey Global Institute’s 2014 report Overcoming Obesity: An Initial Economic Analysis found that taxing sugar is one of the least effective interventions in combating obesity. The study found that of 40 model interventions, taxation was not in the top ten interventions and that the science supporting taxation as an effective policy intervention was deemed as weak.

According to the McKinsey Global Institute, the most effective way to combat obesity include reformulating drinks, offering smaller portion sizes and providing better education. The New Zealand Beverage Council supports these as effective measures to combat obesity.

In 2014, Mexico enacted a tax of approximately 10% (one peso) per litre on all sugar-sweetened beverages, excluding dairy or alcoholic beverages, as well as an 8% tax on “junk food” such as chips and candy.

While the tax did increase the retail price of sugar-sweetened beverages and resulted in a six percent drop in the sale of soft drinks in its first full year, this impact was short-lived.

Further, the tax did not appear to have had any meaningful impact on the caloric intake of the Mexican population. The caloric consumption from beverages has declined slightly – between two and six calories per day – in a diet of roughly 3,000 calories per day in Mexico. This represents less than a half-one percent

More importantly, the tax has had no impact on obesity rates in Mexico. In fact, Mexico’s 2016 National Health and Nutrition Survey showed  obesity rates actually increased from 2012-2016.

The regressive nature of a sugar tax was also witnessed in Mexico, with the burden of taxation on sugar-sweetened beverages being carried by those who can least afford it. This is because individuals on lower incomes spend proportionately more of their incomes on food. Over 63% of the tax was collected from the lowest socioeconomic group.

In 2015, Berkley, California became the first city in the United States to enact a one penny per ounce excise tax on sugar-sweetened beverages, energy drinks and iced teas, with the goal of reducing local obesity rates.

A study on the effect of the tax in Berkley found the tax has actually resulted in an increase in the overall caloric intake because of changing consumer behaviour.

Because of the tax, consumers in Berkley switched their purchasing behaviour from soft drinks to other calorie dense non-taxed products such as milkshakes, fruit juices and smoothies.

This finding is backed up by research from Yale University, which found that when confronted with a tax on sugar-sweetened beverages, consumers tend to switch to milk and juice beverages, which may contain as much, or more, sugar as soft drinks. The result is no change in total calories consumed.

Another study in the United States involving the actual purchases of 100 households found that a ten percent increase in soft drink prices led to growth in beer consumption.