The facts about our bottle water industry

New Zealanders are blessed to have abundant rainfall. Water is a renewable resource, and every year around 500 trillion litres of water falls on the country as rain or snow, and flows through our lakes, rivers and aquifers on its journey to the ocean. 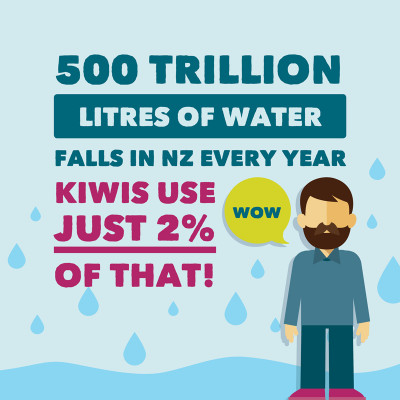 But while we have plenty of rainfall, we also understand that many people have growing concerns about how the country uses its freshwater, who is using it, how it is captured and the environmental impact of its use.

Kiwis use around 10 trillion litres of freshwater every year (two percent). It comes out of our taps for drinking and bathing, we use it to water our gardens, farms and crops, it helps produce a wide range of foods and is used to support our industries.

The water bottling industry is a very small user of  freshwater in New Zealand – using only 163 million litres of water, or less than 0.002% of the 10 trillion litres used annually by kiwis.

This is the equivalent to half-a-day of water usage in Auckland. By comparison, around 5 trillion litres of water are used for irrigation every year.

To put it another way, if all the water used by New Zealanders was reduced to fit into a ten litre bucket, the water bottling industry would use the equivalent of two teaspoons.

Most water bottled in NZ is consumed by kiwis

The remaining 28 million litres of bottled water is exported (this is the equivalent of 10 Olympic swimming pools), with nearly half of this water going to the United States.

The United States is followed by China and Hong Kong, which takes 44 percent of our exported bottled water, while Australia takes four percent.

We are a very small player on the international stage, making up just 0.3% of the world’s export bottled water market.

We do not support the introduction of a royalty on the export of bottled water, which we believe would unfairly target the water bottling industry.

The imposition of a water royalty could see the closure of a small number of boutique New Zealand companies and the relocation of larger multinationals.

This would risk the estimated 916 jobs within the industry, the $60 million in economic benefits injected into the community every year and the $24 million in export earnings, as companies either can no longer compete or shift their operations to other countries.

And unlike other beverages, water is also not a high value product, with the Ministry of Business, Innovation and Employment (MBIE) estimating the average export price of water from New Zealand is US$0.64c per litre.

Given the overheads associated, including establishing a multi-million dollar plant,  ensuring purity of product, marketing, packaging and transportation, many companies struggle to make a profit out of their water bottling operations.

That is why many New Zealand bottled water operations either require foreign investment to become established or are run by large multi-beverage producers. 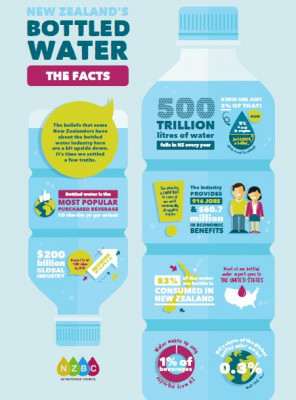 Download a copy of "An Overview of Water Bottling in New Zealand" here.